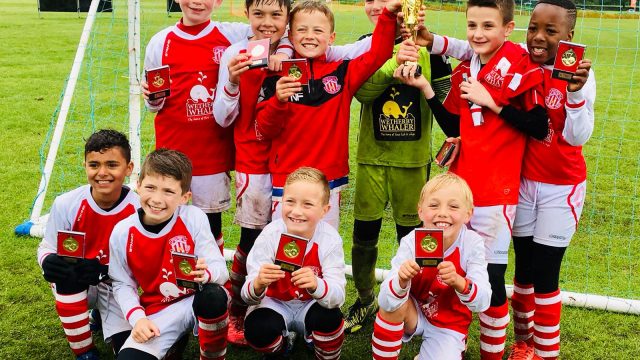 U9 Lightning win the Silsden tournament on 8/6/19 to win back to back tournaments.

The Thackley boys have done it again.

After winning the Otley tournament on 25/5/19 with an impressive Played 8,won 7, lost 1, scored 37 and conceded 2, the boys turned their focus to the Silsden tournament.

The Thackley boys came through the 6 group games unbeaten and made it to the 1/4 finals against the hosts Silsden. Lightning controlled the game but after a defensive mix up Silsden leveled but the boys bounced back and came out 2-1 winners and hit the semis! They now faced a strong academy team in the semis and went 1-0 down to a fantastic free kick but again the boys showed their strengths and hit back, after a 1-1 finish the game went to 6 minutes extra time, the game was end to end and the Lightning keeper Jake made 2 last minute world class saves to take it to penalties. At 5-4 to Thackley Jake made the vital save to take the boys to their second final in 2 weeks.

In the final against Guiseley both teams played at a high pace and there was nothing at all between the 2 teams, neither team created any clear cut chances and the game finished 0-0. Another extra 6 minutes was battled out, Lightning came close in the last minute when forward Conor Kelly broke through but the Guiseley keeper pulled off a great save. PENALTIES.

After 10 great penalties at 5-5 it was down to the keepers sudden death, Lightning’s Jake stepped up first and smashed it straight down the middle GOAL, Jake then took to the goal line to face Guiseley’s keeper and SAVED!! They did it !

At Otley as current holders The boys came through the group scoring 27 goals and conceded only 1 goal taking them straight to the semis.

In the semi final the boys stepped up the pace and came out on top with a 6-0 win, in the final the Thackley boys again stepped up the pace and wanted the trophy for a 2nd year running, after a close start Lightning went 2-0 up but Marton from Middlesbrough hit straight back 2-1, Thackley fired straight back and then hit another finishing the game off 4-1 winners and winning the tournament for the 2nd year running . played 8,won 7, lost 1, scored 37 and conceded 2.